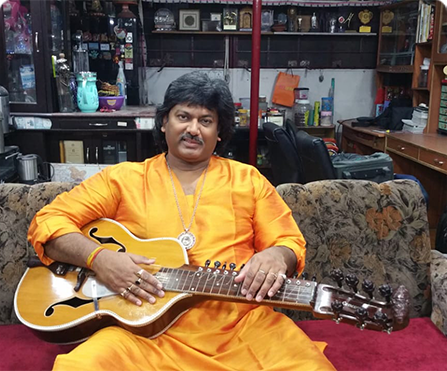 Creator of the Satvik Veena and heir to a 500-year musical legacy, Pt. Salil Bhatt represents the dynamic face of the new age, Indian musician. Being the Global Indian Musician’ honoured by the President of India, Dr. APJ Abdul Kalam for the creation of Satvik veena and being the first Indian musician to perform in the Parliament of Germany and to present Indian classical music in lceland, Reykjavik. Salil has done it all From Solo Concerts and International Collaboration to Exotic Jugalbandis and Global Fusions, Salil has not only managed to marvel audiences in India, bit also has a big fan base in Canada, Germany, Australia, America, Taiwan, England, Switzerland, lceland, Ireland, Scotland, Wales, Saudi Arabia, Oman, Kuwait, Singapore, Spain, Austria, and Italy

Pt. Salil Bhatt has been conferred the many awards for his outstanding achievements and his meritorious services rendered in the field of Indian classical music. Salil Bhatt is the illustrious son of the legendary Mohan Veena player and India’s GRAMMY AWARD winner Padmabhushan Pt. Vishwa Mohan Bhatt.

So Soothing to the ears Spontaneous

A wonderful concert. Salil was amazing from the beginning till the last Hichki