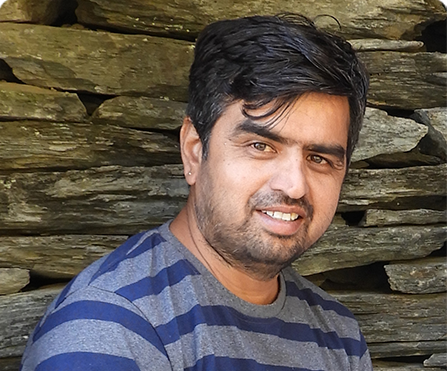 Pawan Kumar Sharma was born in 1979 at Bikaner Rajasthan. He has done B.F.A. and M.F.A. in Painting from Rajasthan School of Arts, Jaipur in 2002 and 2006. He has received many scholarships including Gaddi National Scholarship and acquired state award by (Rajasthan Lalit Kala Academi Jaipur, Raj. ) and national level( All India Art award Lucknow, UP).
His artworks has been on display in many nationwide art exhibitions; Lalit kala Academy, India Habitat Center, AIFACS, NewDelhi. Jahangir art gallery Mumbai. J.K.K, Jaipur etc. Also his artworks has been on display in Vilnius, Lithuania, Central Europe. He has also participated in  many national level art camps and  workshops. His artworks are in collection of many private and government organizations.
His artworks are narrative visuals, certainly a reference of daily routine and surroundings, enriched with new visuals, emotions, effects and impressions. He enjoys portray the story of intangible forms transformed into tangible forms.
In this virtual session  he will share the narrative part of his art work specially in drawings and paintings.

It's very fine and impressive session