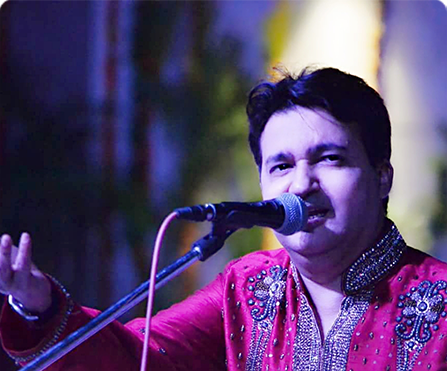 Mohammed Vakil is a prolific singer, a doyen in his art which he has received as an inheritance, being born in a musical family, He performed as a child artist at an early age of 8 years, and his passion for music and proficiency in his craft led him to participate in the famous reality show ‘SAREGAMA’ wherein he bagged the winner’s title in both the finals in 1997 and Mega Finals in 1998.
His first break at Bollywood Playback came when he was offered to sing in the hit film Veer Zara and he has also sung under the music direction of the erstwhile Khayyam Saab and here onwards there was no looking back. Mohammed Vakil has gone on to win many awards & honours such as the “R.D.Burman Pancham Sanmaan in 1998, the Rajasthan Sangeet Aeademy Award 2001 by Govt. of Rajasthan, the Rajasthan Ratna Award, etc and has released many albums & singles which have brought him many accolades.
He has performed nationally & internationally with various renowned artists such as Bhupendra-Mitali, Late Jagjit Singh, Roop Kumar & Sonali Rathod, Shankar Mahadevan, Sonu Nigam, Kavita Krishnamurthy, Pankaj Udhas, Sunidhi Chauhan, Pandit Ajay Chakraborty, Anoop Jalota and Shreya Ghoshal