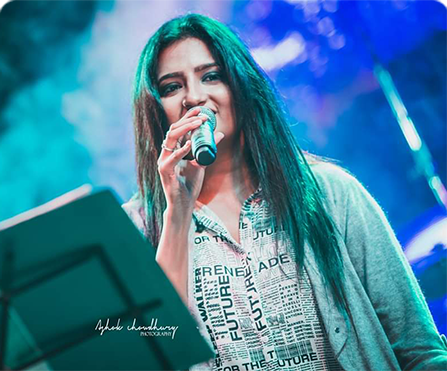 Her unconventional voice and training of almost 18 years under the tutelage of Vidushi Subhra Guha has turned her dreams into reality. Her got her big break in the year 2013 with her debut as a playback singer in Mainak Bhaumik’s film, ‘Ami ar amar girlfriends’ which then was followed by her singing some of the superhit songs of the Bengali film industry. Her unique & husky voice not only gained fans in Bengal but across the Nation. Her latest work in bollywood was the reprise version of the song ‘Shayad’ from the Imtiaz Ali film, ‘Love Aaj Kal (2020)’.

She provides a kind of 'oasis' space in this desert like pandemic era! Truly a gifted artist, full of originality, diversity and above all an extra ordinary manoeuvering of voice!