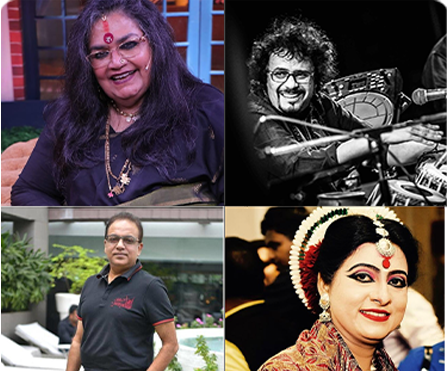 Dona Ganguly – Dona Ganguly is an outstanding Odissi dancer. She took her dancing lessons from guru Kelucharan Mohapatra. She has a dance troupe named Diksha Manjari. The institution was inaugurated by Lata Mangeshkar. Other than dance, the institution has other departments like Yoga, Drawing, Karate and Swimming. In October 2012, Dona Ganguly choreographed Rabindranath Tagore’s Shapmochan which she called a sombre dance drama.

Arindam Sil – Besides being a great director he has always been a
massive supporter of all noble initiatives. He gave up his Phd to pursue his interest in becoming an Actor. In 2012 he directed the movie Aborto. Sil and his company, Nothing Beyond Cinema, has managed the line-production for films like The Bong Connection, Via Darjeeling, 033, Brake Fail, Shukno Lanka, Nobel Chor, Kahaani, Detective Byomkesh Bakshi, TE3N, Meri Pyari Bindu’ and many more.

Pt. Bickram Ghosh – One of India’s best classical percussionist. He is revered globally for his dexterity on the tabla and he is also one of the pioneers of an experimental fusion music. He is an extremely successful film music director having scored for 36 feature films, one of which got him an Oscar contention. He is also known for experimenting and reinterpreting music and culture; he dabbles in a vast repertoire of musical genres, from classical, rock, new-age, fusion to film music.

Usha Uthup – One of the most celebrated pop singers of all times. Her first public singing occurred when she was nine. Ameen Sayani, then popular radio announcer in India gave her an opportunity to sing in the Ovaltine Music Hour of Radio Ceylon. She sang a number called “Mockingbird Hill”. After that, several appearances followed through her teenage years. By chance, a film crew belonging to Navketan unit and Dev Anand visited the nightclub where she was singing and they offered her a chance to sing movie playback. As a result, she started her Bollywood career with Ivory-Merchant’s Bombay Talkies (1970) in which she sang an English number under Shanker-Jaikishan and then Hare Rama Hare Krishna. She also received the Padma Shri Award in the year 2011.

I am in awe and wonder of her singing for past almost 45 yrs ..would love to listen to her for 45 more years .atleast..

Arindam you will be leaving us with a void and vacuum during this slot from 7 pm - 7.30 pm awaited so anxiously daily. Three cheers to all of you🙏

My Guru Dona Ganguly....always a treat to watch you perform..... Beautiful elegant & divine Soothing to the heart mind & soul. Blessed to be yr shishya.Loads of Regards Pranam🙏🙏